“The House with a Clock in its Walls” Shows a Kinder, Gentler, but Still Pretty Scary Eli Roth

“The House with a Clock in its Walls” Shows a Kinder, Gentler, but Still Pretty Scary Eli Roth 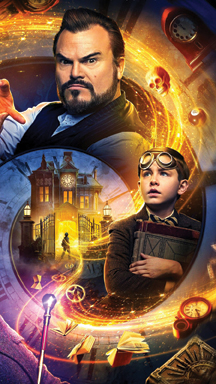 Who, watching the climactic maimings of 2005’s torture-porn classic “Hostel” or the cannibal exploitation of the truly repugnant “The Green Inferno”, indeed, who could possibly have foreseen that the director of those paragons of good taste, Eli Roth, would end up making one of the warmest, most entertaining children’s films of 2018?

Not me, that’s for sure.  Before “The House with a Clock in Its Walls”, Mr. Roth could easily have been written off as, at best, having an imaginative adolescent’s taste for gory, bodily-fluid heavy provocation.  But as it turns out, his work on “The House With a Clock in Its Walls” shows that he can turn in a movie with hardly any bodily fluid, and even less gore.  It’s still adolescent, but this time its intentionally adolescent, and this humble reviewer thinks that probably ought to earn him the Oscar for “Most Improved Filmmaker”.

Based on the series of spooky juvenile novellas by John Bellairs, “The House With a Clock in Its Walls” tells the story of Lewis Barnavelt, ten-years old and newly orphaned, who moves in to the mansion of his eccentric uncle Jonathan (Jack Black, always game).  It quickly becomes apparent that this is not your ordinary house, nor is his Uncle your ordinary Uncle, nor his neighbor your ordinary neighbor (Cate Blanchett, vamping delightfully).  And before long young Barnavelt is learning how to become a warlock, bringing household objects to life, casting spells, so on.  And as long as he doesn’t open his uncle’s locked bookshelf and read from the forbidden volume therein, it’ll all be fun and games.

But, of course, he DOES read from the book, an act of accidental necromancy that sees the house’s demonic previous owner (Kyle MacLachlan) come back to life.  And that whole delightful mess of child’s size horror is accompanied by a literal ticking clock narrative; something in the walls of the house is counting down.  And when its done, well, all Hell is going to break loose.

Sometimes surprisingly scary for a PG offering, “The House with a Clock in Its Walls” is the perfect escape for a youngsters who are beginning to be curious about the horror genre but who aren’t ready for the cut tendons severed fingers of director Roth’s more “adult” work.

In fact, despite being a horror story, “The House with a Clock” is decidedly more grown up than most of Roth’s stuff.  There’s warmth and affection — real actual human emotions other than nausea and loathing.  Call it a big, big step forward for Mr. Roth.